Located between the gazebo and the docks, North Point is our “motel” cabin.  There are four different units connected by a large deck that is facing north-east.  Each unit has two single beds and their own bathroom.  The cabin has a max capacity of 8 people.

On the east side of the island, Sunrise is often referred to as our “couples” cabin.  It has two apartments that are connected by hallway.  The hallway exits out to a deck over-looking the water.  Each apartment has two beds and their own bathroom.  The cabin sleeps a maximum of 4.

Built in the fall of 2016, Rockledge is by far the resort’s largest cabin.  It has two units.  Each unit sleeps 12 people.  The upstairs unit of this large duplex is equipped with a full kitchen and living room.  It has a small front porch looking out at the lake, and a larger back porch with a grill for cooking.  The downstairs also has a full living room, but instead of a kitchen has a game room.  This apartment is designed for Obabikon’s standard American Plan guests.  The downstairs has a large wraparound porch and a great view of the lake on the East side of the island.  Each unit also has 6 bedrooms and 2 full sized bathrooms.

On the south most tip of the island, sits this two story cabin.  The second story is a two bedroom loft with a bathroom.  The downstairs has a bedroom, bathroom, kitchen, and living room.  The cabin has an open floor plan, which makes it feel very much like home.  The memorable characteristic to this cabin is its enormous windows looking straight south over the lake.  The cabin sleeps a maximum of 6.

Facing west, this cabin has a beautiful view of the bay across from Obabikon.  For the cabin’s size, it has a large deck that is perfect for enjoying an evening after a long day on the water.  It has 3 beds and a bathroom.  Plus there is a table and chairs directly in front of the glass picture window looking out over the lake.

Directly behind the lodge on the west side of the island, Bayview is a nice cozy little cabin.  It has 2 beds and a bathroom.  It also has a table and chairs situated directly in front of its picture window, and it’s a perfect spot to play a game of cards or read a book.  The cabin itself is as close as you can get to the lake without getting wet.  It is ideal for our husband and wife or father/son groups.

This cabin is situated on the northwest portion of the island.  Directly up from the docks, it boasts a large deck looking out over the lake to the west, and the docks to the north.  Two large picture windows give this a fantastic waterfront view.  Northern Lights has 2 bedrooms and a bathroom.  It sleeps up to 5.

Located in the center of the island just up from the office, Hideaway is conveniently located close to the lodge and just up from the docks.  The cabin itself has 2 bedrooms, a front room and 2 bathrooms.  It sleeps up to 7, and has a table and chairs for any late night card games that might be going on.

Just a few steps away from the docks, the Icehouse is as convenient as it gets.  Its elevated footings give the cabin a private feel, but allow those staying there to be right in the middle of the action.  The cabin has a full kitchen, living room, 3 bedroom and 2 bathrooms.  The two story building will sleep a total of 6, and has a fantastic elevated deck looking out over the docks.  The deck has a new propane grill, and the cabin itself has satellite television.

A public building, built out over the water.  It has satellite television, poker tables, board games, and a conveniently located ice machine.  All of this is open to our guests for socializing with each other.  If you’re worn out, and would rather spend an evening relaxing than heading right back out onto the lake, make your way to the east side of our island.  It’s a great place to spend an evening and enjoy the sun going down.  If you stay up late enough, there isn’t a better spot on the island to view the northern lights.  The gazebo is also a very convenient spot for shore lunches.  If cooking out on the lake sounds like too much, just up from the fire pit, many guests enjoy eating their fresh catch on the gazebo’s wrap around deck. 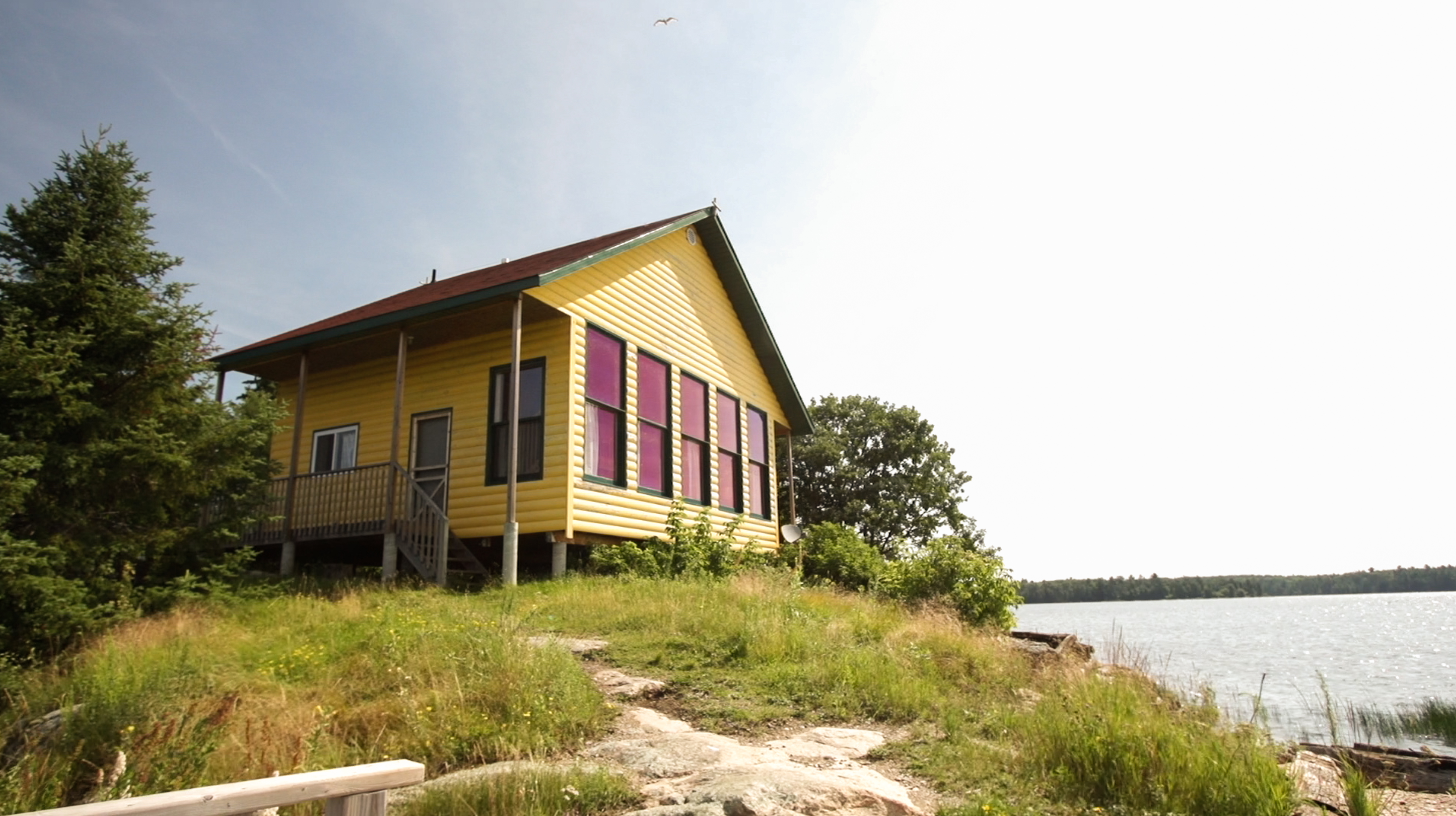 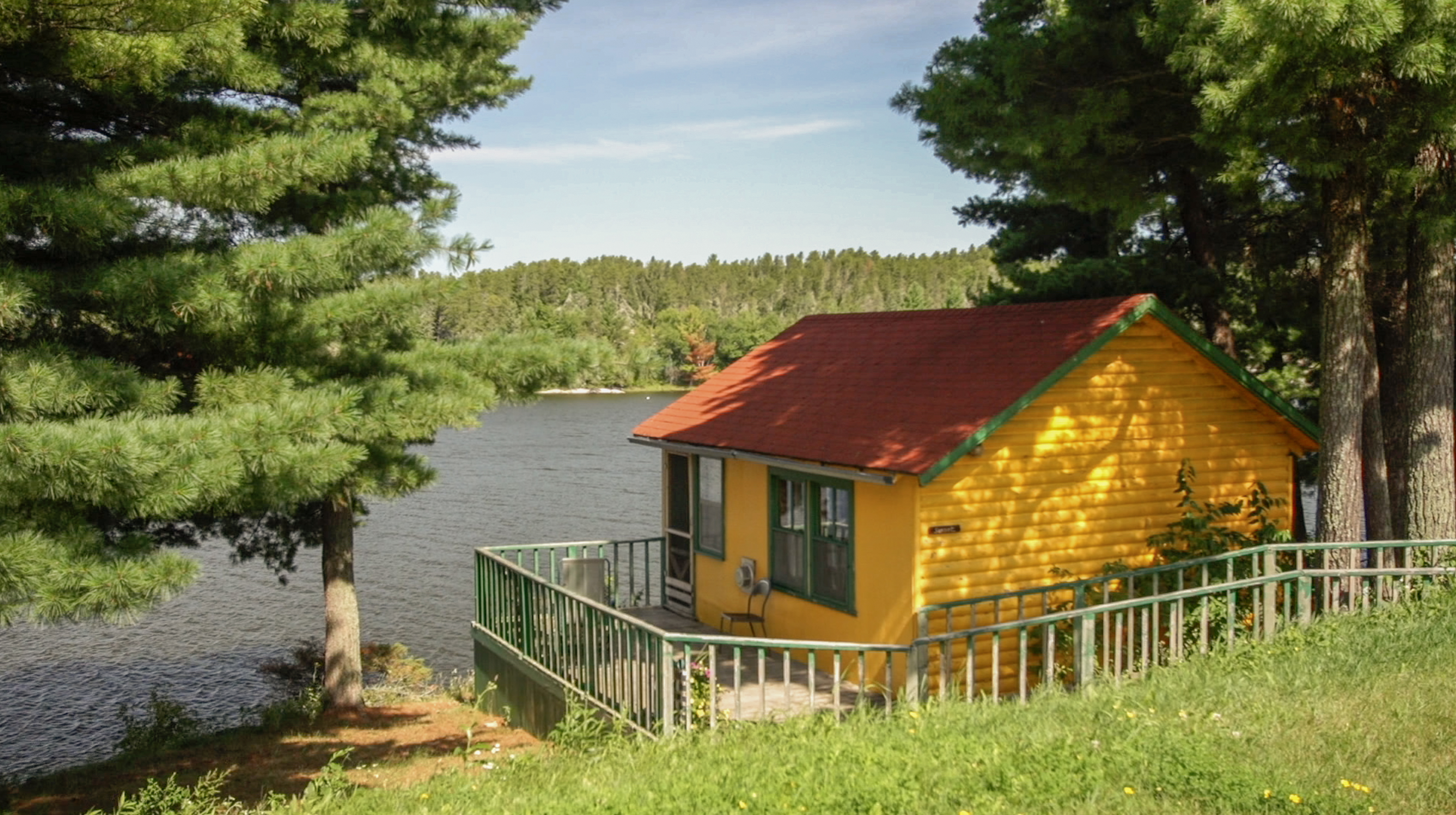 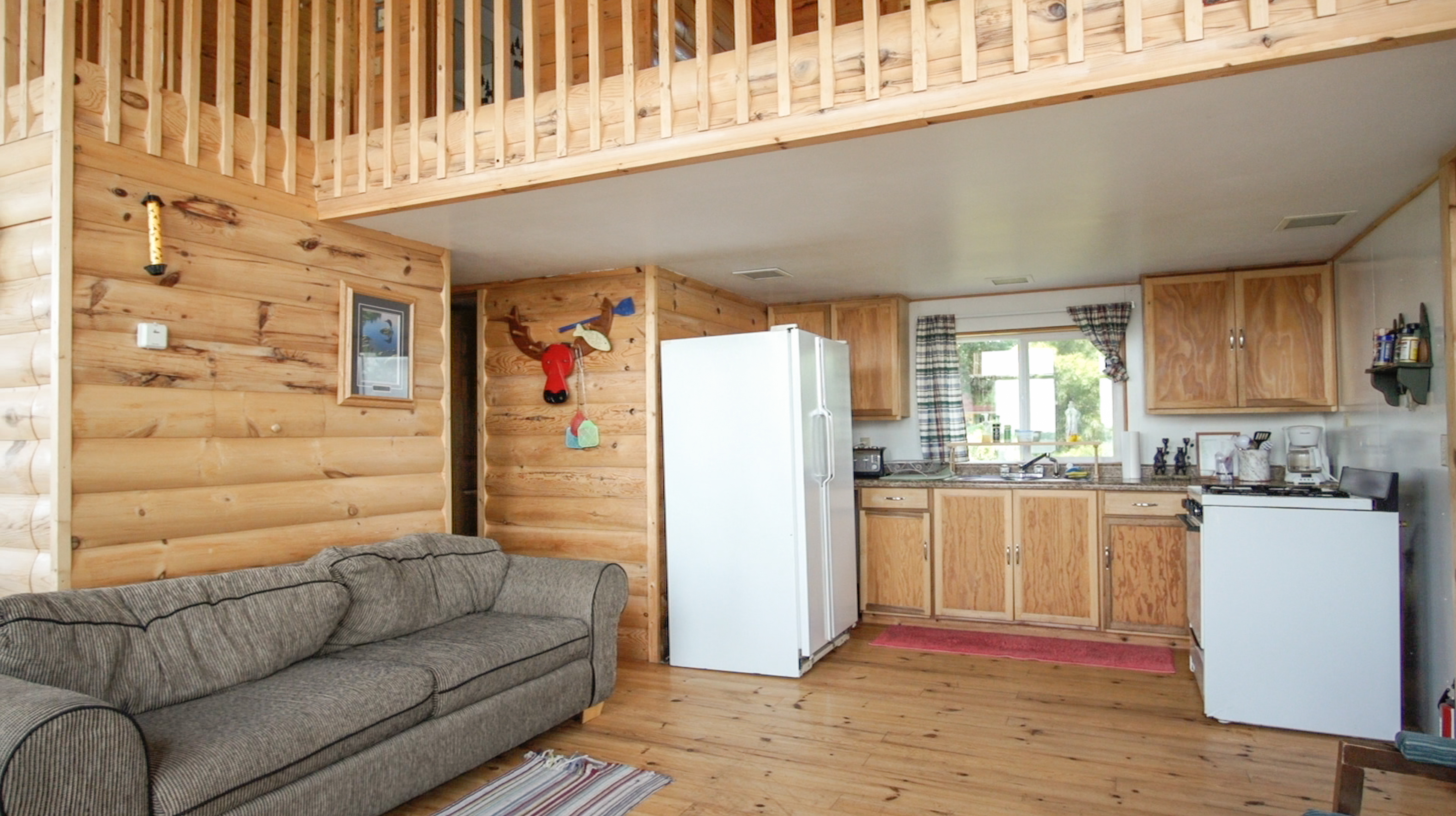 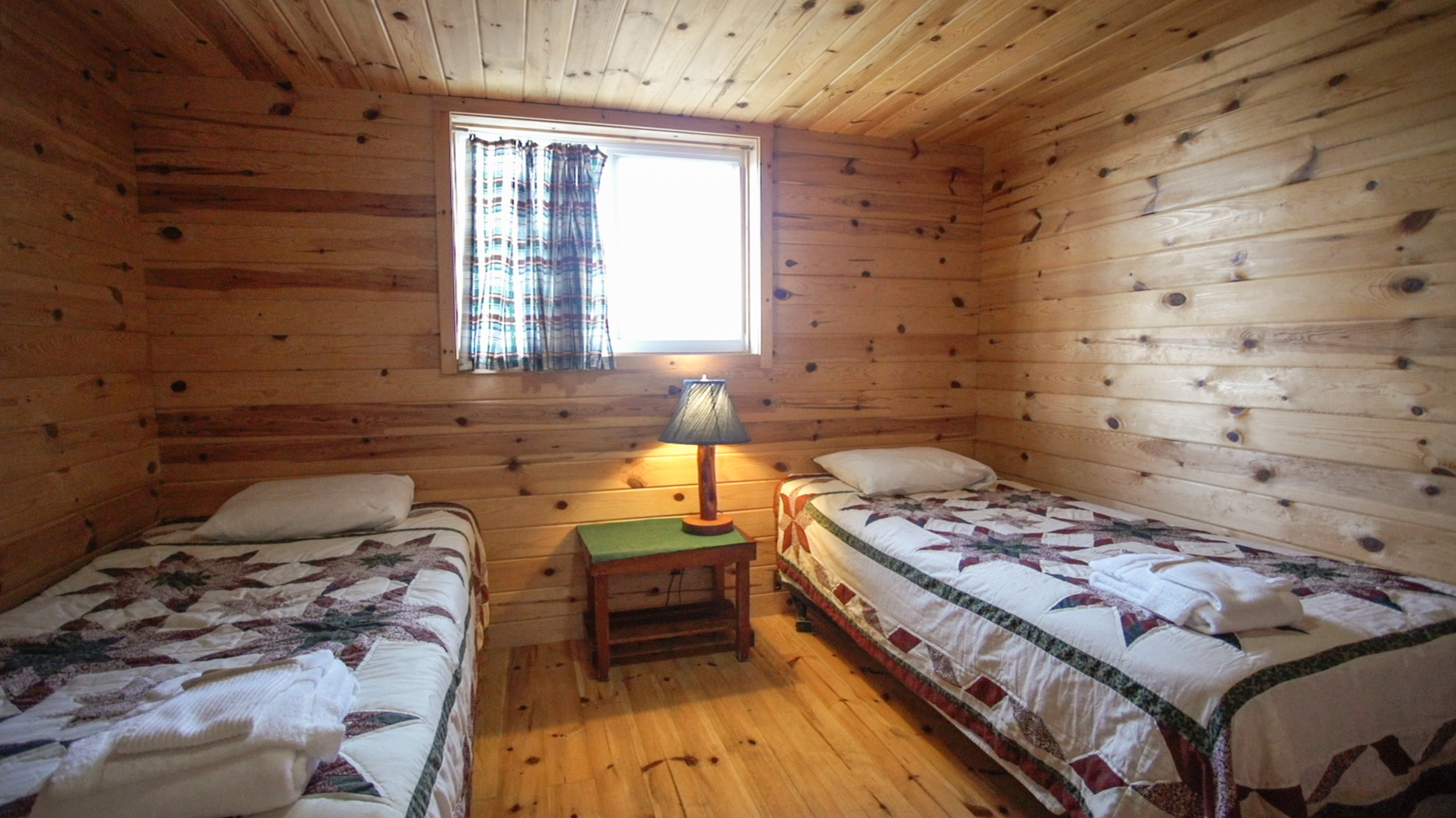 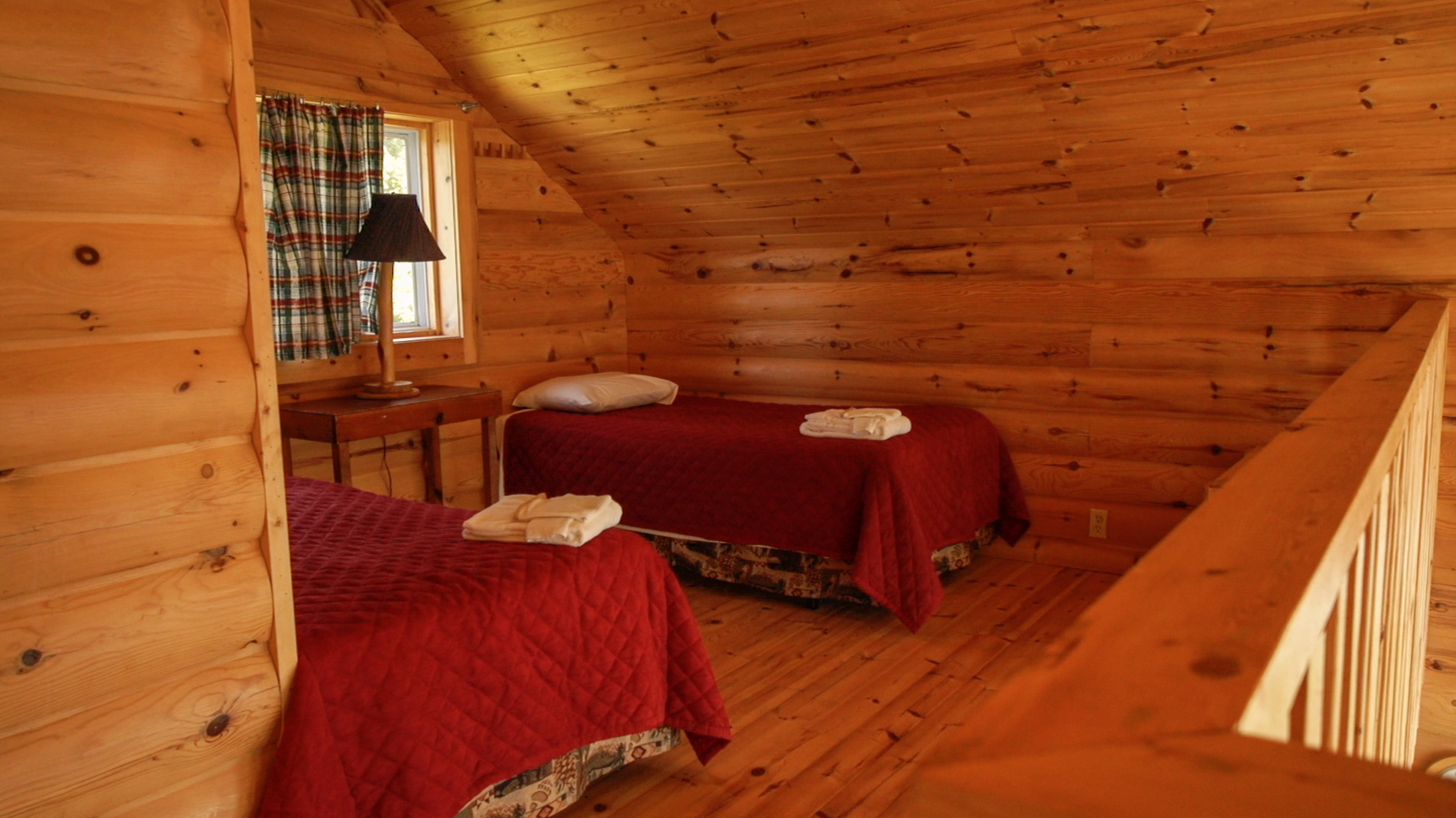 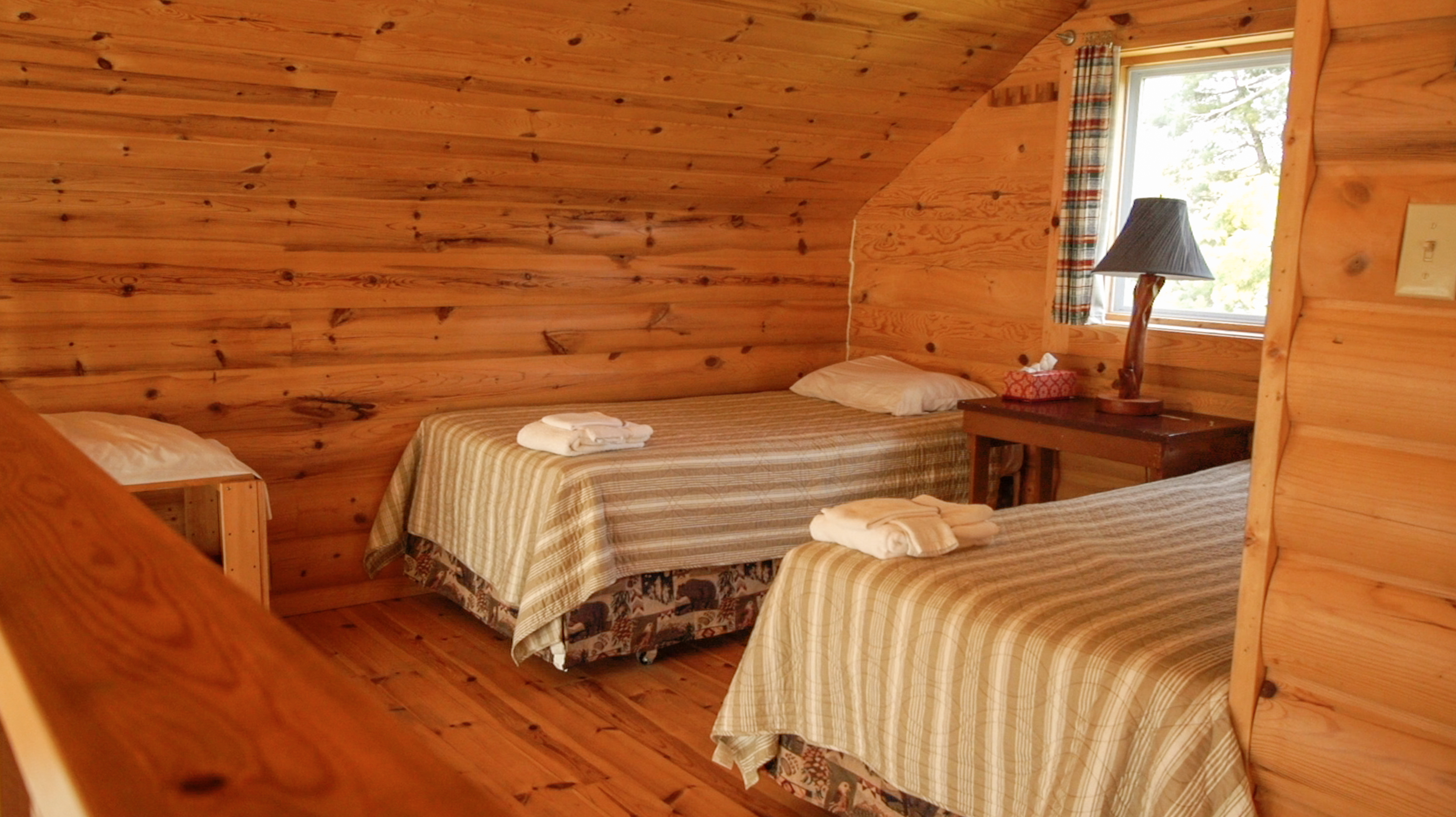 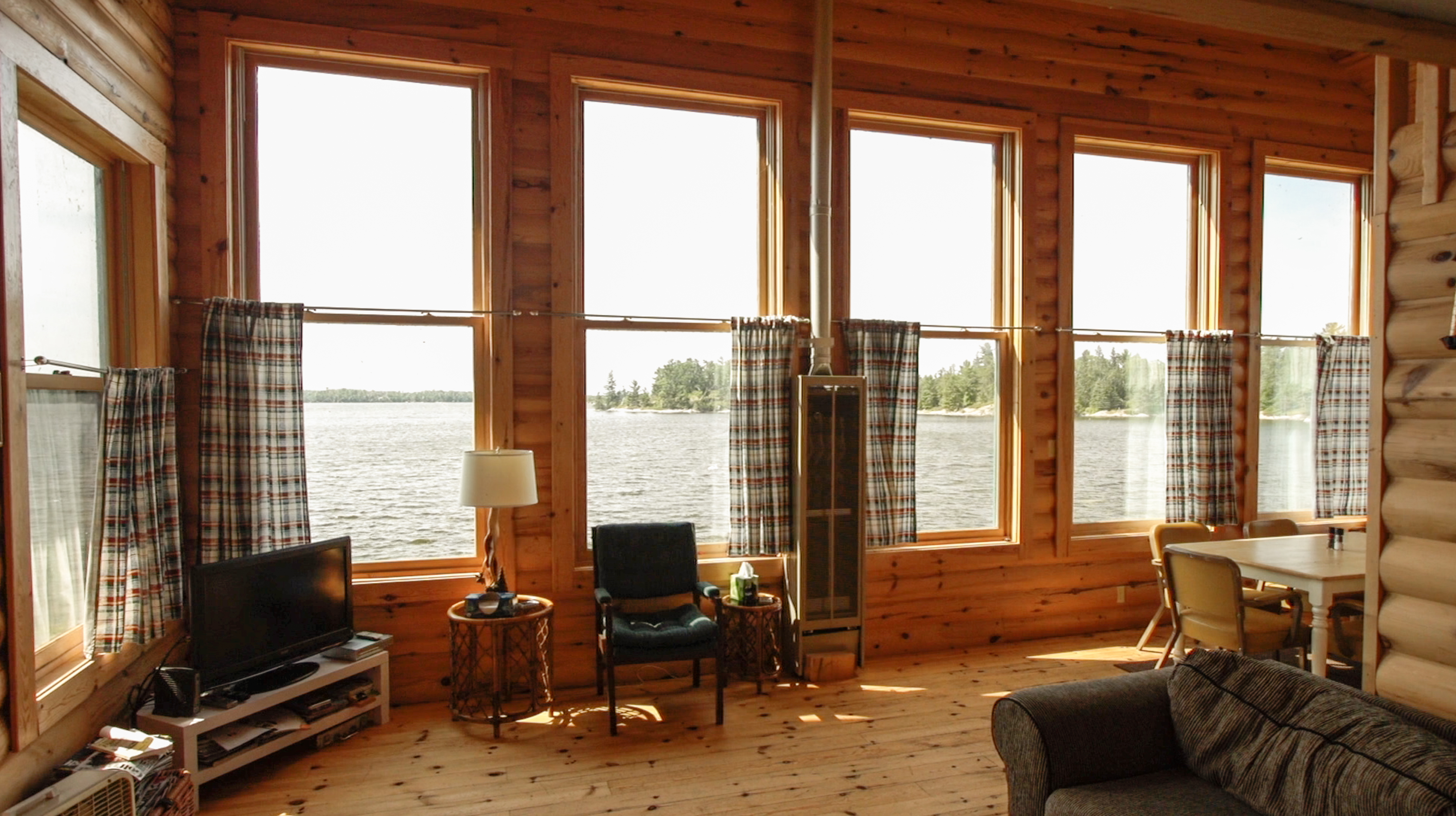 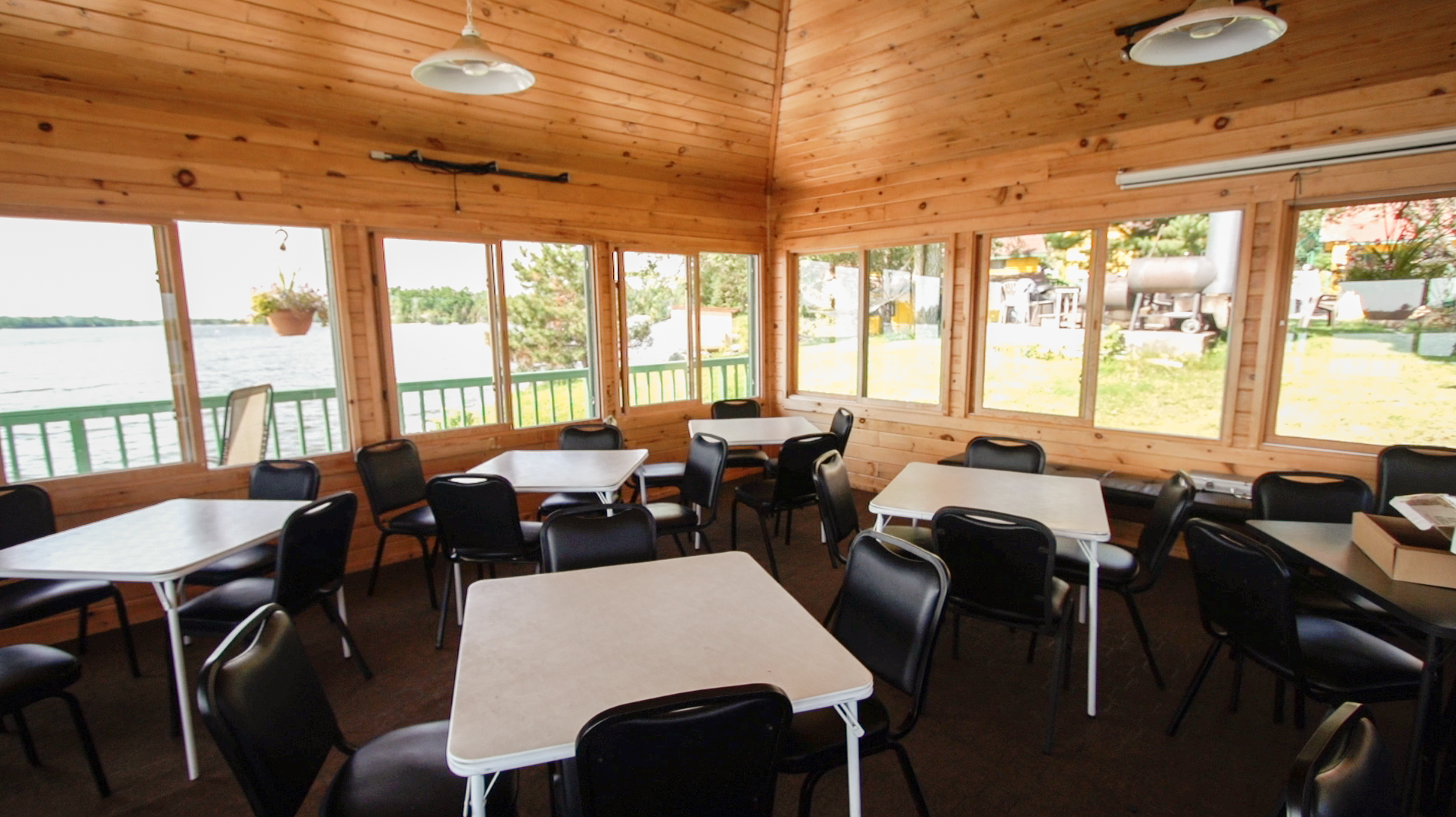 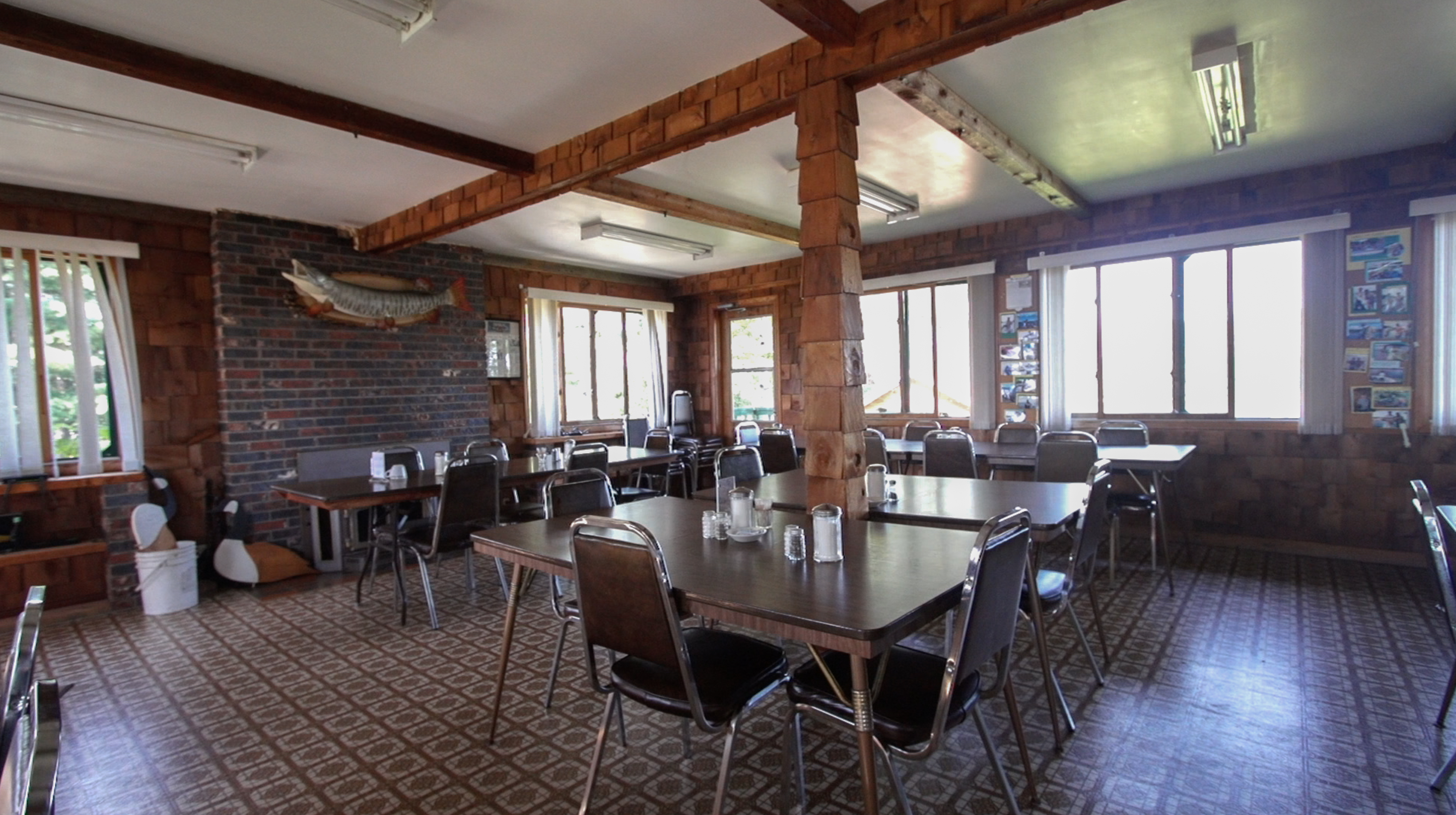 Obabikon Bay Camp is an island resort with all the comforts of home offering both American Plan and housekeeping plans. Satellite TV, Wireless Internet, lounge and handicap access will suit your needs. In addition to fishing we offer bird hunting, hiking trails, canoes and allow pets. Contact us for your next adventure.
Plan Your Next Vacation!
Book Your Trip